Planned as a middle-class suburb in the mid 19th century, Marchmont was originally designed to be filled with terraced and detached townhouses. Superseded by Sir George Warrander, the area is now mainly Victorian four or five storey tenement flats. The home of Ian Rankin’s Inspector Rebus, Rankin himself resided in Marchmont’s Arden Street while attending Edinburgh University. 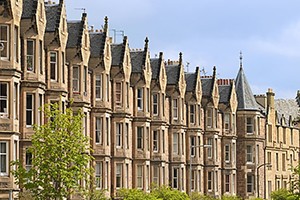 A popular area for university students, Marchmont is close to Edinburgh University, Napier University and Edinburgh College of Art. Bordering the meadows, it is close to the city centre and has a number of restaurants, bars, coffee shops, shops and delicatessens within easy reach.

The architecture in Marchmont is almost exclusive four-storey Victorian and Edwardian tenements built in a Scottish baronial style. Many have period features such as high ceilings, cornicing and fireplaces.

Restaurants, cafes, delicatessens and bars such as Café Artista, Victor Hugo and The Birchwood offer great food and drink. As Marchmont is right on the meadows, there is plenty of access to green space. So whether you want a picturesque stroll, a challenging run, a picnic or to take the children to the park, it is the perfect spot.

Marchmont is a quick journey into the City Centre with excellent bus links and easy car routes to other parts of the city. If you have a car, many properties in the area have on-street parking. However, a permit is usually required. This can be arranged through the Edinburgh City Council.

Close to Bruntsfield (EH10) and Morningside (EH10), Marchmont is close to Newington (EH9) and the Old Town (EH1).