East of Edinburgh City Centre, Easter Road got its name from being the ‘Eastern’ road to Leith. There was also a Wester Road at the time which is now known as Broughton Street. Until the creation of Leith Walk in the mid 17th century, Easter Road was considered to be the main thoroughfare down to Leith Links and The Shore. Mary Queen of Scots and Sir Oliver Cromwell are both documented to have ridden up the street. 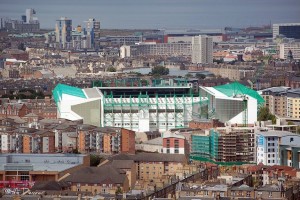 Today, Easter Road is best known as the home of Hibernian Football Club. The fifth largest football stadium in Scotland, it has hosted local, national and international games since 1893.

The area has a number of good local amenities with local shopping at Meadowbank Shopping Park, as well as an easy commute to the City Centre. The area is on the doorstop of Holyrood Park, which boasts its own extinct volcano. Arthur’s Seat offers one of the most spectacular views of the city.

Easter Road boasts restaurants, bars, coffee shops, delicatessens (including the famous Manna House bakery) and shops. Its properties mostly consist of tenement flats. However, there are a number of modern developments on and around Easter Road.

The area is a quick journey into the City Centre with excellent bus links and easy car routes to other parts of the city. If you have a car, most properties offer on-street parking. However, usually a permit is required. This can be arranged through the Edinburgh City Council.