East of Edinburgh City Centre, Holyrood lies at the bottom of the Royal Mile. Originally a separate burgh, it was a largely industrial part of the city with several breweries and a flint glassworks until the 19th century. Modern Holyrood is the home of the Scottish Parliament Building, Holyrood Park, Dynamic Earth and the Palace of Holyroodhouse – making its most famous resident none other than the Queen.

The area has a number of good local amenities with local shopping at Meadowbank Shopping Park, as well as an easy commute to the City Centre. Holyrood Park boasts its own extinct volcano. Arthur’s Seat offers one of the most spectacular views of the city. 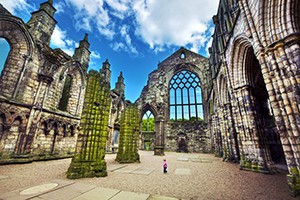 Properties in Holyrood vary from medieval tenements to modern developments and houses. It’s very much rooted in ancient Scotland while being a part of the modern city.

The area is within easy access of many restaurants, including Hemma, David Bann and Wedgwood. Right at the bottom of The Royal Mile, it is within walking distance of a number of attractions including Edinburgh Castle, John Knox’s House and the Museum of Childhood.

It is a quick journey into the City Centre with excellent bus links and easy car routes to other parts of the city. If you have a car, most properties offer on-street parking. However, usually a permit is required. This can be arranged through the Edinburgh City Council.

In between Edinburgh’s Old Town (EH1) and Abbeyhill (EH8), Holyrood is also close to Leith (EH6) and Hillside (EH7).