The Council does not seem to have a clear policy regarding short term lets. Factotum are concerned that landlords are getting confusing advice from council workers. They seem to have advised some of our landlords that a tenancy longer than a month would represent the tenants’ only or main residence, adopting HMRC’s definition of 31 days as a holiday let.

31 days? And you’re a permanent resident? 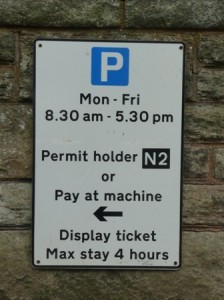 Permanent residents, i.e. long term tenants, qualify for voting, schooling, health services, school catchments and zone parking. These residents pay Council Tax in return for these privileges. Temporary residents cannot claim any of the above, as the Council Tax and ALL utilities for holiday lets remain in the landlord’s name. The tenants in most cases are already paying Council Tax (or equivalent) at their permanent address (here or abroad). So do they pay for both properties? Do they lose their right to their child’s school place for going on holiday or working away for 8 weeks?

Factotum would argue (albeit briefly) that short lets is a generic term – not a legal one. What we refer to as a short term let is legally defined as a ‘holiday let’. Our leases state: ‘As tenants you acknowledge that the purpose of the tenancy is for a holiday and that under the terms of the Housing (Scotland) Act 1988 where the purpose of the tenancy is to confer on the tenant the right to occupy the property for a holiday, then that tenancy is not an Assured Tenancy under the terms of that Act.’

Edinburgh Council’s adoption of the HMRC determination of 31 days as a holiday let is a red herring. It has nothing to do with the legal definition of a holiday let. It’s an income tax benefit if an owner chooses to let their property for holiday lets for at least 140 days a year. If there was a correlation, it was to protect landlords. In the absence of any alternative tenancy, prolonged holiday lets have always been legally permissible.

One only gets into potential difficulty if you repeatedly renew a holiday let to the same tenant. At this point, court decisions in the past have often judged the let was clearly not for a holiday but to keep the tenant on a short leash. That is still the case today. The 31 day rule is a measure to protect the landlord in light of case law decisions.

It’s hard to establish where the Council are really coming from. It initially seems to be prompted by owners. A landlord is exempt from landlord registration or HMO legislation if their property is ‘used for holiday lets only’. It would be understandable if short / holiday lets might be viewed as an instrument to dodge landlord registration or HMO legislation. The moment there is a “problem” tenant, neighbours are calling the Council to check these facts and getting the Council’s internal posturing on the subject as a response and indeed provoking further probing and enquiry.

Recent legislation in the PRS was supposed to simplify and streamline the tenancy laws but there are still great gaps in the whole area. The subject of lets ‘up to six months’  have been largely ignored. There has been some lip service to allow the new tenancies to be of a lesser period than six months but that is no different than is the case presently.  Essentially the whole subject is as much of a grey area has it has been for the past 50 years or more. Certainly, using the new style tenancies for a shorter let would be very risky as the tenancy could not be ended unless the landlord wanted to sell.

So where does this leave us? Either rent for 31 days or less… or accept a permanent tenant that it could prove very hard to evict? This is an arrangement that suits neither landlord nor tenant.

As this void in the legislation remains it has the potential to cause mischief in the sector. The legislators and those representing social housing fear that short lets may be a consequence of reducing property availability.

Meanwhile the holiday let sector, who accommodate visitors, tourists, contract and peripatetic workers, are feared that these wealthy, social housing lobbies’ acquisitiveness to assimilate any healthy element of housing into their sector represents a real threat to their livelihood and indeed Edinburgh as a destination.