The Pleasance is a street bordering the Old Town. At the end of the Cowgate, the area is a remnant of the original town walls. Deriving from the old Scots word ‘plesance’, meaning a park or garden, today’s Pleasance is right next to the sprawling Holyrood Park. The area is known mostly for its role during the Edinburgh Festival. Through the month of August, the Edinburgh University buildings on the main street are transformed into lively venues. 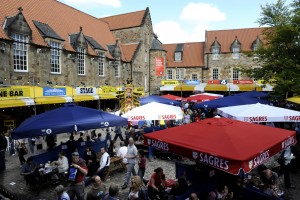 The Pleasance Courtyard is one of Edinburgh’s most famous Fringe venues. Known as a major comedy venue, it has hosted acts such as Paul Merton, Tim Minchin, Nina Conti and David O’Doherty.

South east of Edinburgh’s City Centre, the area is packed full of restaurants, bars and coffee shops. The properties here are very mixed, from traditional townhouses and medieval flats to modern developments.

Close to a host of attractions, the Pleasance is within walking distance of the Scottish Parliament, the Royal Mile, Arthur’s Seat and The National Museum of Scotland. Eating out can range from coffee shops and cafes like Hemma, to restaurants such as David Bann and Acanthus.

The area has excellent bus links and is a stone’s throw from Edinburgh Waverley train station. If you have a car, some properties offer on-street parking. However, usually a permit is required. This can be arranged through the Edinburgh City Council.

In between the Old Town (EH1) and Holyrood (EH8), The Pleasance is also close to The Grassmarket (EH1) and Newington (EH8).