We make it no secret that we love dogs at Factotum. Our office Springer, Sam, is often joined by other staff dogs including Jackson the Jack Russell, Hanks the English Bulldog and Chica the Cockapoo. 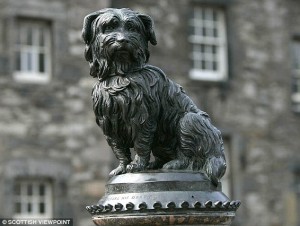 Let’s start with a classic. Bobby was a Skye Terrier that belonged to John Gray, who worked for the Edinburgh City Police. When John died, the devoted Bobby was known to guard his grave in Greyfriars Kirkyard for 14 years until he died himself in 1872. He was buried in the same Kirkyard alongside his owner. A statue of Bobby now stands at the junction of George IV Bridge and Candlemaker Row to commemorate him.

Beauty was the dog of The Great Lafayette, one of the most popular illusionists of the early twentieth century. Lafayette travelled to Edinburgh in May 1911 as part of his world tour with his small cross-bred terrier in tow. Given to him by Harry Houdini, Beauty lived a charmed lifestyle, sleeping on velvet cushions, dining on lavish meals. He even had a pure gold collar studded with diamonds, a private railway carriage whenever he travelled, and special rooms designed for him fitted with dog-sized sofas and miniature porcelain baths. Four days into his Edinburgh trip, Beauty died of apoplexy (caused by overfeeding). Lafayette, grief stricken, laid Beauty out on silk pillows surrounded by lilies at the Caledonian Hotel (now the Waldorf Astoria). Beauty was then embalmed and laid to rest at Piershill Cemetery. The show must go on, so the devastated Lafayette continued with his scheduled performances at The Empire Theatre (the site of the current Festival Theatre). However, there was an accident with a gas lamp which caused an inferno and 11 deaths – including The Great Lafayette himself. He was buried alongside Beauty, and their graves are still there today just inside the Portobello Road entrance to Piershill Cemetery. 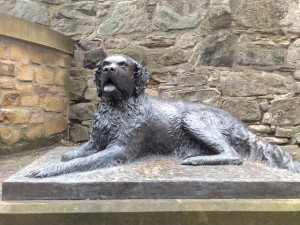 If you enter Princes Street gardens from King’s Stables Road, you will see a bronze statue of a dog named Bum. The statue was gifted to the City of Edinburgh by the city of San Diego, California. Bum’s story is like that of Greyfriars Bobby. A street dog, he was adopted by the people of San Diego who would ensure he was fed and cared for. Local artists would paint his portrait, restaurants would advertise ‘Bum eats here’, and he became the unofficial mascot of the city until his death in 1898.