Broughton was a feudal barony in the 16th and 17th Century. Controlled by the Bellenden family, their most famous ancestor was Sir Lewis Bellenden, who was rumoured to be part of the Ruthven Raiders – a political conspiracy intended to prevent Mary, Queen of Scots from returning to Scotland. Another famous figure to be linked to the area is Ian Rankin’s Inspector Rebus, based in the Gayfield Square police station. 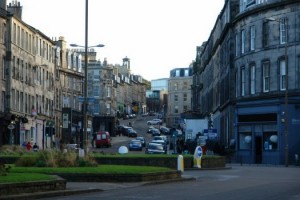 Broughton Street itself is packed full of good pubs, restaurants, coffee shops, gift shops and delicatessens. Its properties date from the early 1800s and vary dramatically in terms of size. Accommodation on Broughton Street itself is mostly flats, but there are a number of generous townhouses on its adjoining streets. The properties’ period features offer their residents high ceilings and generous room proportions.

Broughton Street restaurants, cafes and bars such as Rollo, The Olive Branch, Smoke Stack, L’Escargot Blue, Artisan Roast and Treacle offer great food and drink. Combined with a number of specialist delicatessens such as Crombie’s (an Edinburgh institution!), The Broughton Delicatessen, Something Fishy and Real Foods – you’ll never go hungry living here. Although it’s in the middle of the city, it’s close to a number of green spaces such as Calton Hill, Princes Street Gardens and Pilrig Park.

A five minute walk to Princes Street, the neighbourhood is right in the centre of Edinburgh. Edinburgh Bus Station is off the adjacent Queen Street and Edinburgh Waverley train station is within easy walking distance. If you have a car, most properties here offer on-street parking. However, usually a permit is required. This can be arranged through the Edinburgh City Council.